The Met Ball can be seriously scary and beautiful all at the same time. People want to take a risk, but they want to still be chic. And then there are those that take a risk just for the shock factor and it is a hot mess. There was a little bit of both last night, and I want to start with my favorites. 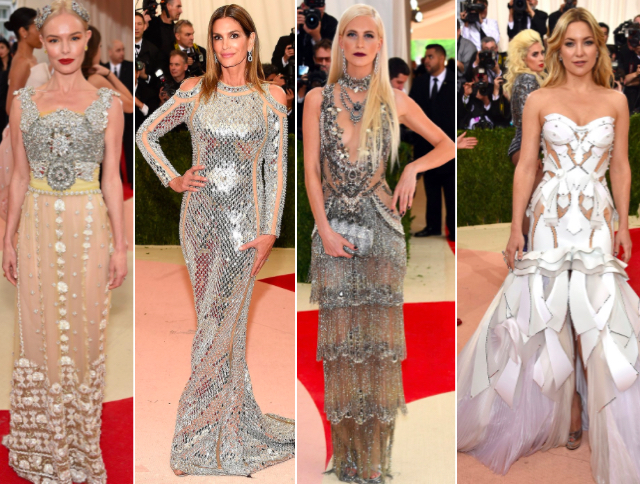 From Left: Kate always verges on severe, but this dress is a true work of art and I love the headpiece with it. Cindy slays. She looks beautiful, works in the theme (ManusXMachina) but looks effortless doing so. Poppy looks both from the future and Victorian past with make up from the 90s. Which I would never put all together, but somehow it all works flawlessly. Kate's Versace is truly a work of art. We knew we would be seeing cut outs, because it is the trend that won't quit, but this dress is unreal and fits to perfection. 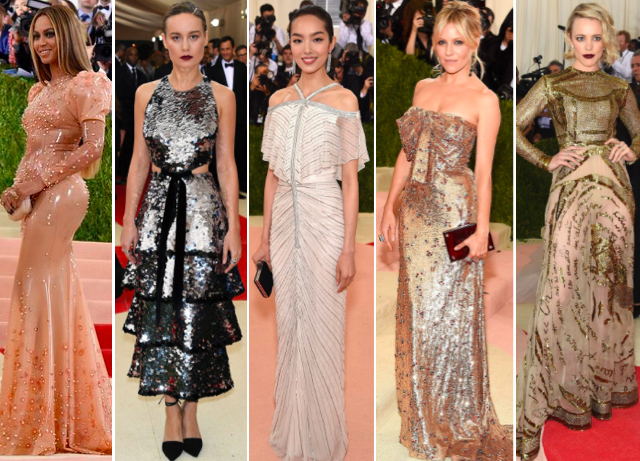 This will be Beyonce's first time at the top of my list I think. Maybe because she is showing less skin?? The dress is incredible and her hair and make up look so fresh. Brie needs to lose the severe hair AND make up, but I love this Proenza Scholer. I am forgetting this gorgeous girl's name, but I LOVE this dress. Sienna nails the dress and the beauty this time. Again, I am not sure I can handle the super dark lip on Rachel, but I do love this Valentino. I would have lined it instead of the nude undies, but other than that I love it. 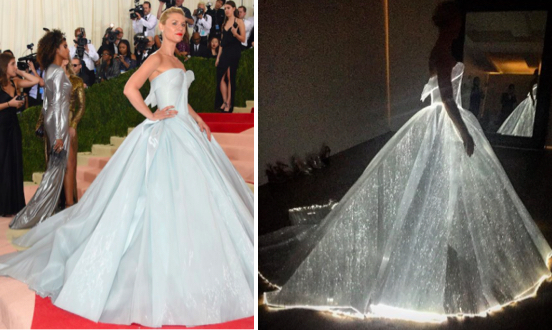 Claire Danes had a full Cinderella moment in Zac Posen, which looks stunning and then this happened when she went inside to the low lit room. Unreal and SO amazing.

There were a lot of great looks too...
There were quite a few vets of the Ball that I liked. 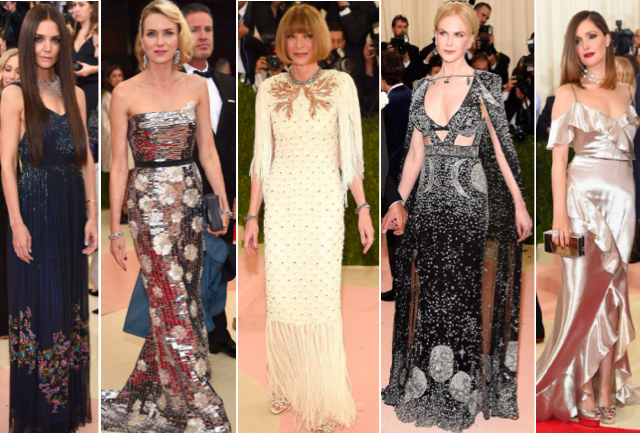 Haven't seen Katie in awhile, the hair is intense, but I like the dress. Naomi looks stunning per usual, but this is really similar to her Oscar dress. Anna gets a little playful in fringe. Kind of over the cape, but this futuristic look on Nicole is nice. Rose just had a baby and looks pretty in this Ralph Lauren.


The pretty young things came too... 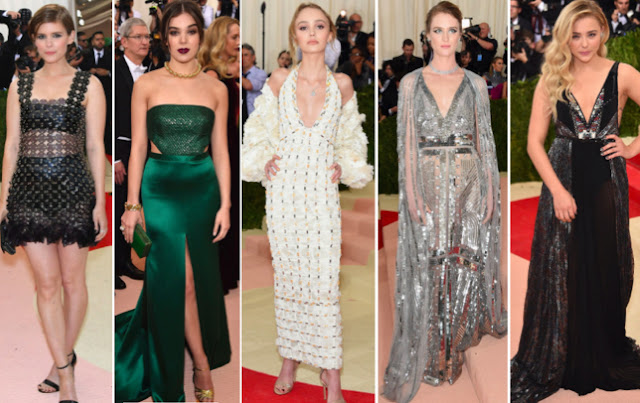 Kate is not dressed up at all. Short and See through with basic shoes, not enough for this event. But don't hate it either. Hailee in a dark lip and emerald green. Nothing show stopping, but pretty. Lily looks chic in Chanel. Mackenzie pulls off the cape way better than Nicole and this dress is gorgeous. Chloe is standing so awkwardly, but this dress is young and cool. 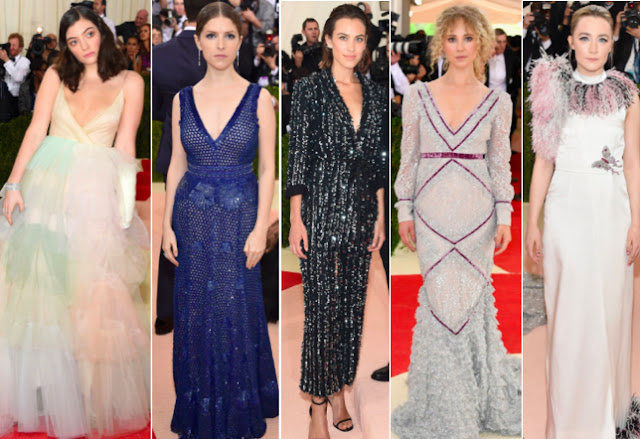 Lorde also has the most awkward pose ever, but this Valentino is pretty. Anna needs to smile, big time, but love the color of this blue. Alexa Chung goes sparkly tuxedo and I love it. I love this geometric on Zoe (?). Not sure I love all the fathers and random butterfly on Saorise, but like that she did something different.

There were a few grand entrances that worked I thought... 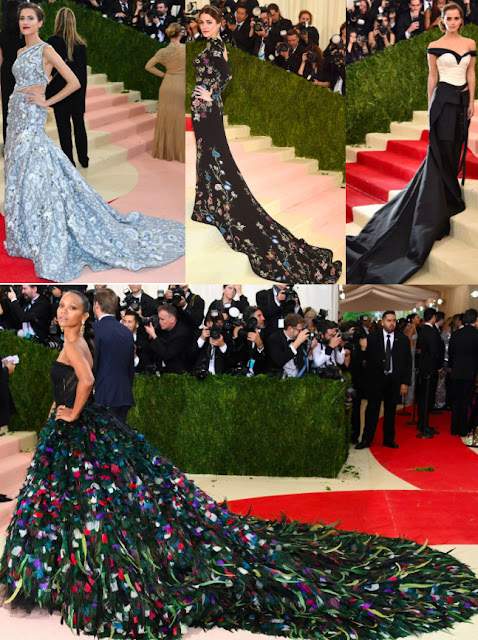 Allison's cut out is a little strange, but the dress is a work of art. Bee Shafer pretty much slays every year, this is great but also reminds me of her dress last year. Emma's dress has a strange kilt attached to it, but somehow she pulls it off. Zoe brought the drama in Dolce and it is pretty.

And of course the super models were out in full force... 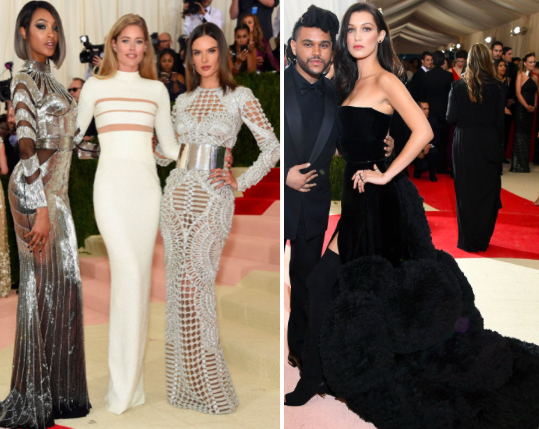 Joan, Doetzen, and Alexandra all in Balmain, Love Doetzen's best. Feel like we have seen those other dresses before. I think the work gets lost on Bella's black gown, but she looks pretty. 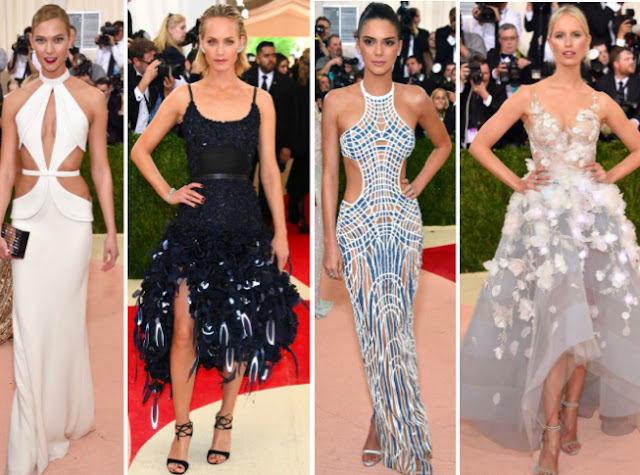 Normally I loathe the naked dress, but this is a tailoring masterpiece on Karlie. I kind of wish that Amber's dress did not have a slit, but I love her entire look. Kendal's dress is kind of cool, just wish those cut outs were smaller, too bathing suit-y. Karolina's Marchesa is beautiful. 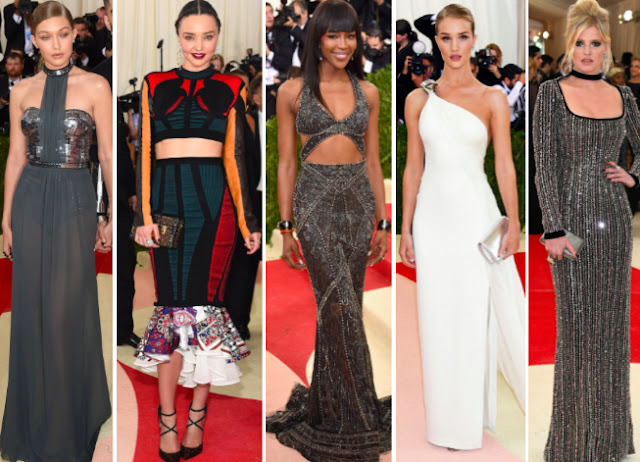 Gigi looks gorg, but so over this sheer over leotard/underwear look. Miranda's LV is not my fave. Naomi looks 22, so I guess the cheese factor of her dress is kind of ok. RHW is a goddess, seriously is she a real person? Simple, but lovely. Lara is a kind of unreal in tom Ford. like a living Bridgette Bardot.

Two bumps done so right on the red carpet... 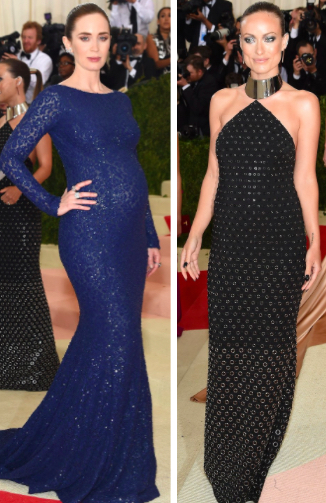 Emily looks amazing and Olivia (never without a choker or course) looks radiant.

Some other looks I loved... 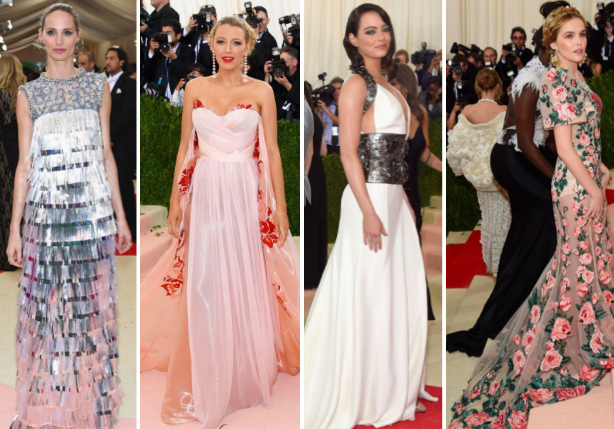 LSD can wear anything. Not sure I love the silhouette, but the dress is rad. Blake's matching earrings, dress, and lipstick are a little saccharine, but it is really pretty. This dress looks a little awkward in Emma, but certainly a strong look for the theme. I do not know this girls name, but this is a floral I can get behind. Love it with the hair.

I would not call this boring, but certainly safer looks of the night... 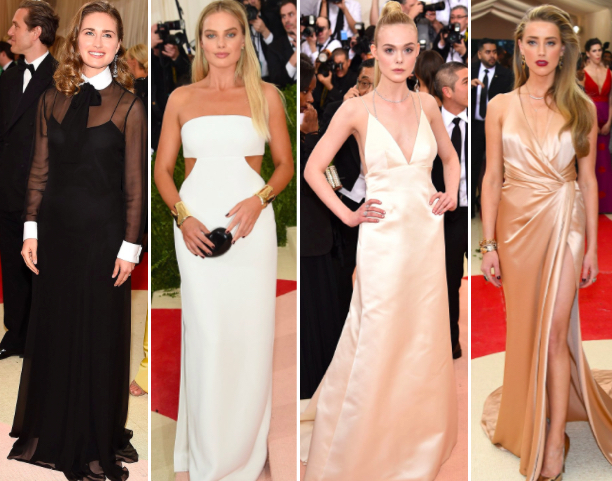 A Lauren in Lauren, I think it is a little old for her, but I love it. Margot got seriously sprayed up for tonight, but it is pretty. Elle looks gown up and gorgeous. Amber goes full vamp in nude. Maybe too nude, but great.

There were a couple squads there... 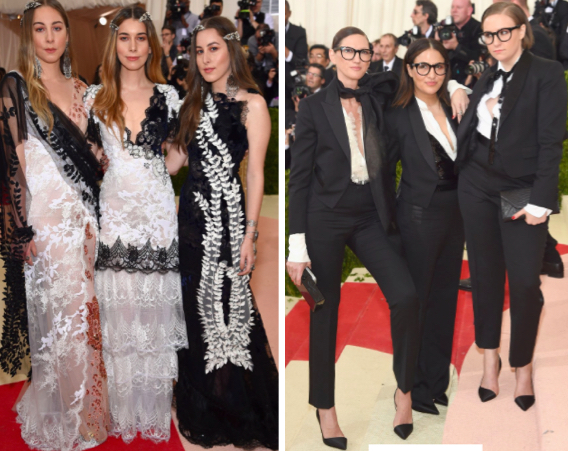 Haim the Band is cool enough to pull off mismatched Rodarte. Those headbands are pretty and I love the black dress. And Lena Dunham with her co creator of Girls escorted by Jenna Lyons is SO genius. I loved this so much. And I want those shoes Lena has on stat.

And then there were some risk takers. Not on the worst dressed, but controversial... 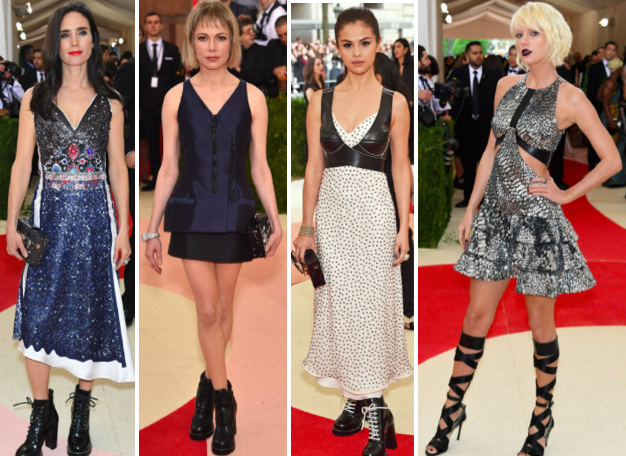 These first three ladies are all wearing Louis Vuitton and trying to bring back Doc Martins. Which I can appreciate, but not on this carpet. I actually love all of the dresses on their own. And Selena's make up and hair looks so fresh. Taylor is really intense with this new look. Like did you really need to throw on the black lip too? The boots are killer and I am sure she was dressed by Anna, but cut outs again??? Not terrible though.

Now on to the my worst dressed of the night... 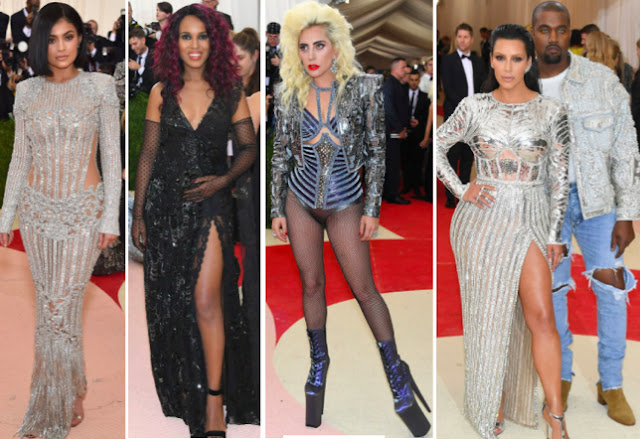 Kylie has worn this dress before and the ice skating/pageant look is lame. Wows Kerry Washington. Let's begin with those gloves, then move to the hair, then the ill fitting dress and slit. Not great. If Gaga had worn bottoms to this jacket we would probably all be surprised, but bare legs and the boots is too much. Kim is actually not bad, but nothing revolutionary. Kanye's jeans, boots, sparkly jacket, and contacts throw them down at the bottom. 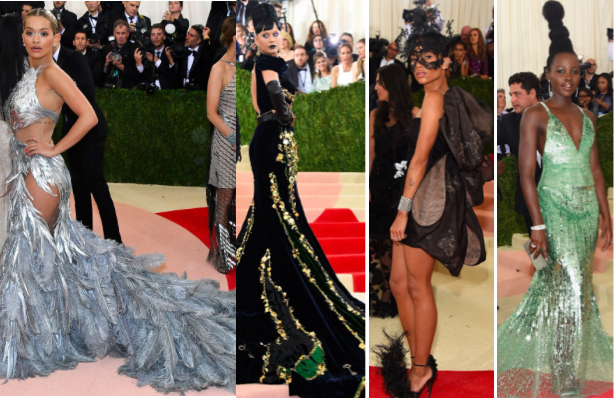 Rita is wearing Beyonce's naked dress form last year. Katie is over gothed. Zoe is actually not bad, but those shoes are so weird to me. Lupita was trying to make a statement and the dress comes off kind of cheesy. The hair is interesting, but not sure it makes the right statement. 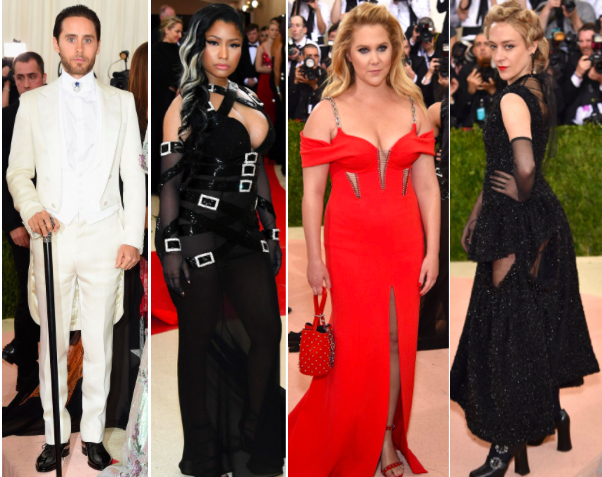 Jared is just missing his monocle and looks creepy as s*it. Nicki is like a S&M Jessica Rabbit and she got the idea for those mesh gloves from Kerry. Oh Amy, I love her so much. But I cannot get behind this look. All very matchy and her dress comes off little cheap. Ugh that feels mean, but she could be in something SO much better. Chloe, come on now. Those boots and curls are not okay. 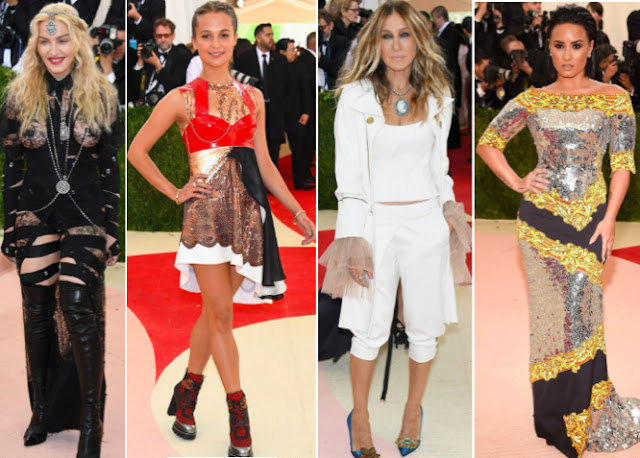 Madonna literally just got custody back of her teenage son and THIS is what she choses to wear. Again, that feels mean, but you are over 50! This look does not do Madge any justice. Alicia is kind of my favorite and this dress makes me want to curl into a ball. It kind of cannot be described. Ice skating costume/go go dancer/hiking boots. I am so sad. Speaking of sad, SJP. Come on lady, you always delight us with something fun and crazy and this is a big wha-wa. Demi, no. This is just a no.

So what do you think? Any I missed or you thought I got wrong? Would love to hear!
xo
Erin