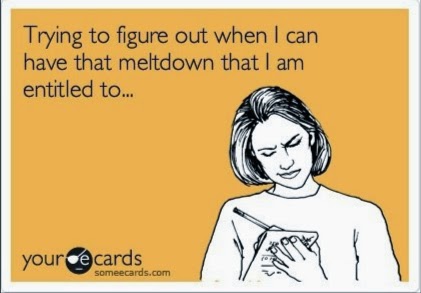 Things can add up pretty quickly in our lives. Moms or not. You tell yourself that you won't get so stressed or frustrated or fed up or all of the above that you will change the way you promised yourself you would parent. But, oops there it is. We all believed that we would not do those things we always judged others for doing (other mothers or our own. ha) and then we went ahead and did it, and life went on and our kids are turning out pretty great.

This week I asked Moms:

What thing do you do now that you swore you never would when it comes to parenting?

"There was no way that I would let my kids eat or drink more than water in the car. Those sticky, crumby cars always grossed me out as a kid. But alas, after the first whines from the back I am handing out crackers and lollipops like Santa. Bottom line, sometimes a drive in the car is the only peace I get while sitting down in the day."

"I am guilty of saying those things I swore I never would. Like, "If you won't brush your hair, maybe we should just cut it all off."  I might now say this once a week, at least, to my daughter!  My girls are, of course, just as picky in regards to eating as I use to be.  I say to them, "Don't say 'I don't like it' say 'I don't care for it'!" My parents always said that one day I would have a kiddo that would do just the same annoying things that I did to them...they were right.  My husband is in SHOCK that he now is living with 2 of me. "

"I swore that I would never put my kid on one of those kid leashes! But with the second one on the way, I'm seriously contemplating it."

"Talk about peeing and pooping like it is a perfectly normal topic of conversation."

"Coming from a family of all girls, I swore my children would never wear hand me downs.  They would always wear brand new spanking clothing. Two children later realizing that children grow like weeds, and some outfits don't even get worn, I'm saving everything for the future third child. It's new to them!"

"I was never going to let my kids watch or play with our iPhones/tablets while eating out at a restaurant. They need to learn to sit through a meal, right?!? But after all else fails and I'm trying to enjoy a nice meal and glass of wine, I'll do anything to keep the peace. Gotta love the Disney Jr. App!"

"As I grew up and would think about how I wanted to be a mother, I told myself I would never let my kids watch TV. However, as the first one came and then the next I have found myself using TV to help distract the oldest to actually accomplish tasks with my younger one. Whether it be nurse the younger one or change a diaper. My hope is that


TV keeps the oldest distracted enough to not break, tear, or flush something down the toilet when I am unable to watch."

"I swore I'd never breast feed this long. She's 10 months and I'm still doing it. It's hard to just stop and since I've come this far I might as well keep going. I don't want to start dealing with formula now even if it is for just 2 months. I also said I'd never have baby crap all over the common areas in the house. Yeah right. Like I'm going to put everything away in the baby's room every time. That would be even more exhausting :)"

" Saying "bc I said so!" I've found myself saying this all of  a sudden over the past few weeks my toddler literally says "why?" 15 times minimum after everything I say... Usually I'm patient for the first say 10  but by 15 I'm like just "because I said so" and he usually replies with "oh, ok"

"Giving in to the whining when at the store. I swore I'd never be the mom that tries to buy her Child's silence by giving in to whines and screams for cookies! Lollypops and ice-cream while grocery shopping. Pretty much always end up grabbing a box of junk and handing it over so I can get my shopping done! Eek!"

"I was going to be a mom whose baby adapted to my schedule and not vice versa.  YEAH RIGHT!  My life revolves around my son's nap time.  Period."

"Wipe baby snot on my clothes!! Now its toddler snot and I still do it!"

"When my son was born, I swore I would make all of his food from scratch.  I would say to people, why make boxed macaroni and cheese when making it from scratch is just as easily.  Fast forward two years to this past weekend, I fed him hot dogs two days in a row. At least they were organic."

What is your answer? Would love to hear.

Email ThisBlogThis!Share to TwitterShare to FacebookShare to Pinterest
Labels: baby, being a mom, kids, mom, secret lives of moms