So the Emmy's have always been kind of the forgotten step child of the red carpet scene with the Golden Globes and Oscars taking the much deserved spotlight.
But let's get serious, there are maybe three movies a year that I actually get excited about seeing, and my DVR and Netflix are full of every tv show I can possibly devour in the shortest amount of time (current obsession: Damages).
So while we missed the Great Cate and Lupita's swagger last night, let's give the ladies of the Emmy's red carpet some props and be glad that they dressed up to be judged.
There were a lot of amazing looks, let's start with those… 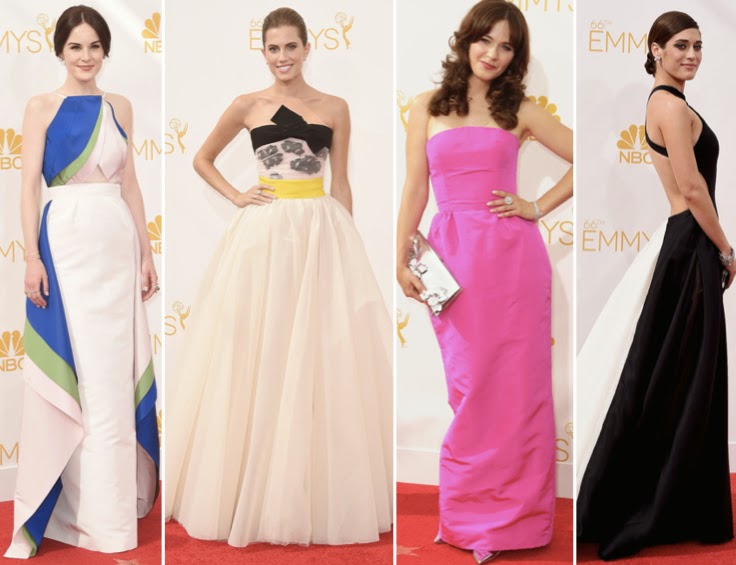 I know this will be controversial, but I love Lady Mary's Rosie Assoulin. The color combo is so different and pretty. Allison Williams looks perfect. Worship that dress so much. Zooey chose a a great color and swayed from her usual too retro look. Lizzy Caplan, aka Janis Ian, was unreal. This is the back and this... 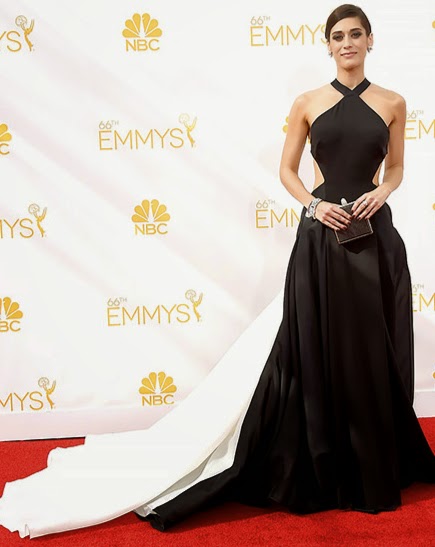 Is the front. Donna Karen perfection. 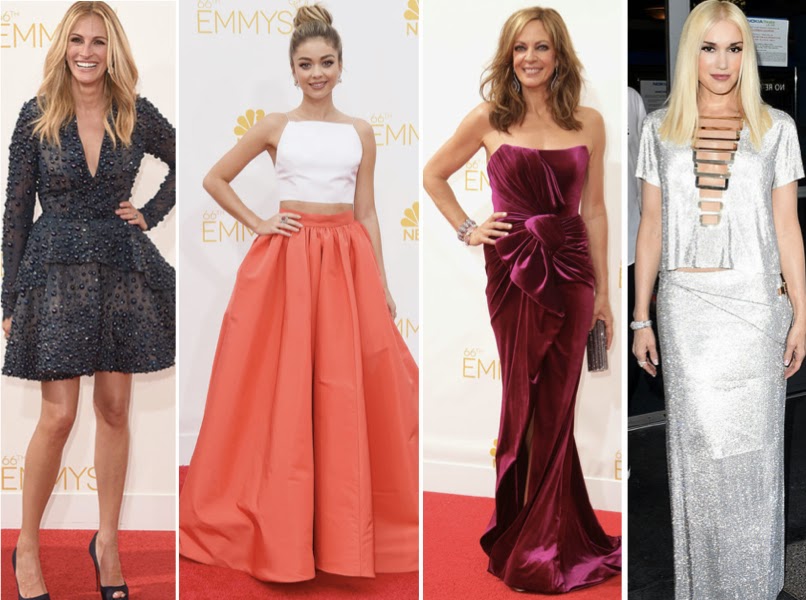 Only Julia knows how to pull off a short dress, which I normally hate at event like this, but since it is so embellished it works. This two piece Christian Siriano set on Sarah is lovely. I know a bit prom 99, but I think that is what I love about it. It looks great from all angles. Velvet, oh what a tough one, but this dress on Allison Janney was beautiful. This pic of Gwen does not do this Versace justice, the girl rocked it. Two piece, Swarovski crystal encrusted, amazingness. 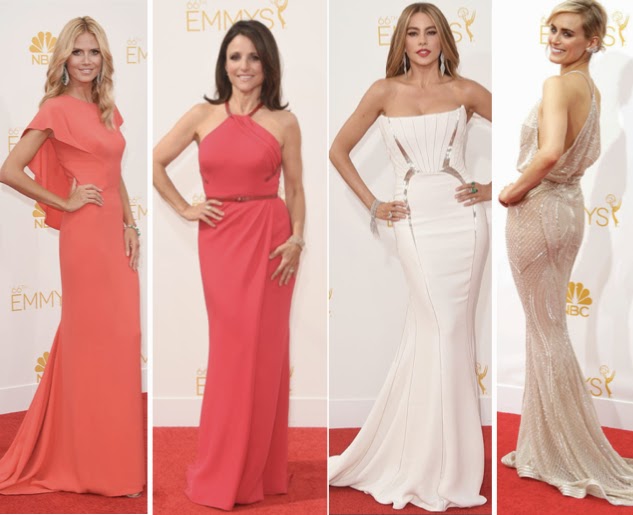 Heidi is so hit or miss and I love this caped Zac Posen. Although she is looking super thin, even for a super model. Juliette was stunning and her hair looked pretty. Sophia's usual mermaid look got a slight modern update that really worked. Loved the lack of sequins, so chic. Taylor looked relaxed and pretty. Doesn't she always kind of look like she is having a good time? Which has got to be hard at these events. 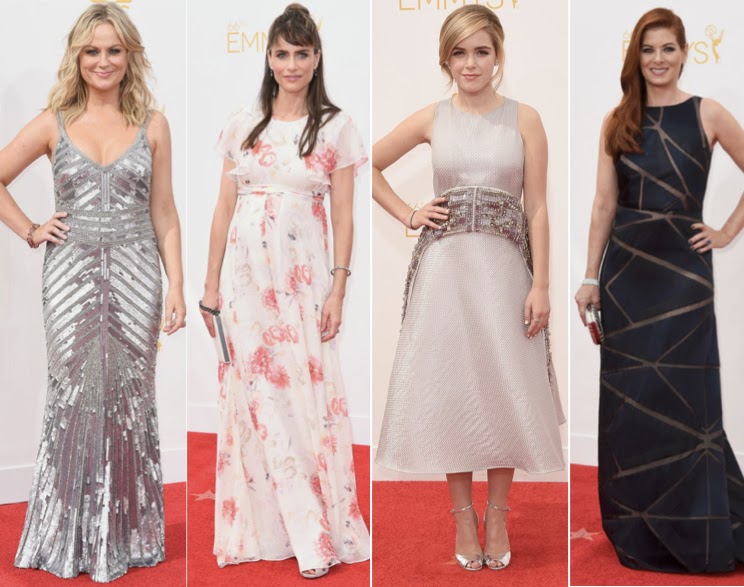 Amy glammed it up, not her best look, but I love her. This pretty frock on Amanda Peet looked better on tv, she is pregnant and this was just so feminine and sweet. The half up bun is up for serious debate.  Kiernan, man I love this girl. This was a bit heavy, but I love her wiliness to take a chance. Debra Messing has been a hot mess in the last few years, this dress was modern, flattering, and she looked beautiful.

Now the not so beautiful… 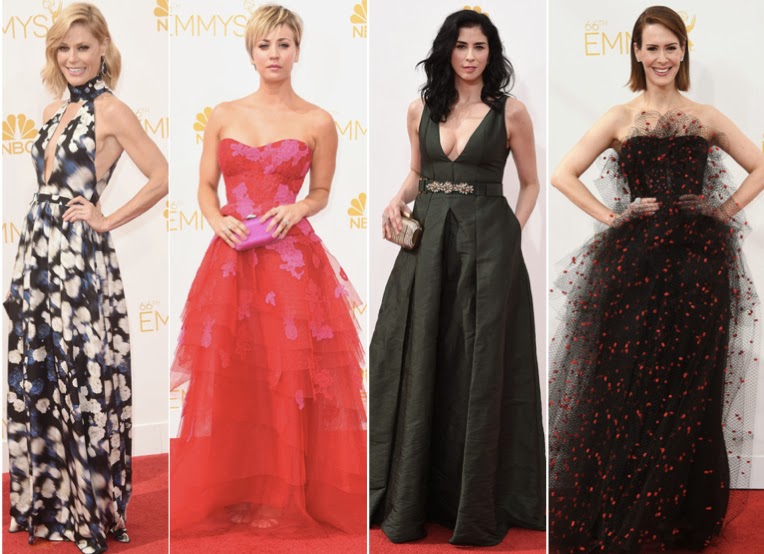 I actually loved this dress from Peter Som on the runway, but the blurriness does not translate well on the red carpet and the mock turtleneck is killing me. I do not think I have ever liked anything Kelly Cuoco has worn. The girl bugs and this can just be added to the list of cheesy and not cute. Sarah Silverman's dress is unflattering and wrinkled. This frothy tulle number on Sarah Paulson could be really great and fashion forward, but it went too far. Like three layers of tulle far. 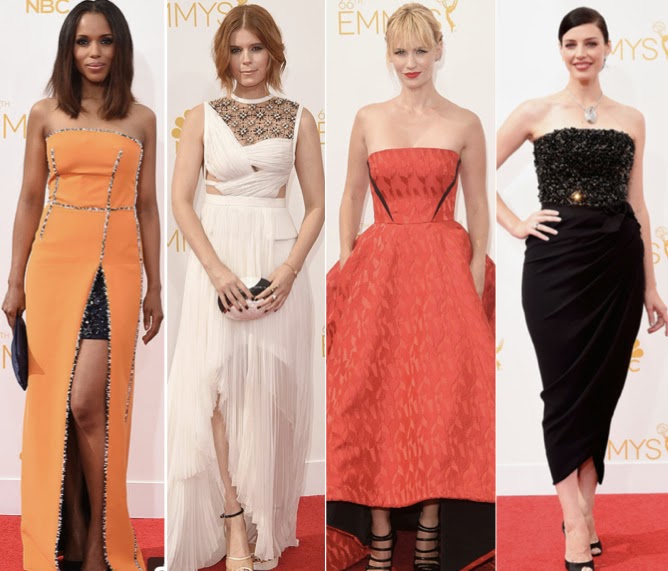 While I love the color of this Prada on Kerry, it was ill fitting and the fake shorts underneath, um no. While I actually like this on Kate Mara, it is too similar to Anna Kendrick's Oscar gown. And her hair is awful. You have got to love January Jones for her fashion forward eye, but those bangs are unforgivable. You know when you have bangs and just wash them instead of your entire head before going out? Well she did that, but then never blew them dry. The Prabal Gurung dress is gorge though. Jessica Paré is so pretty and this is SO unflattering The necklace was weird too. 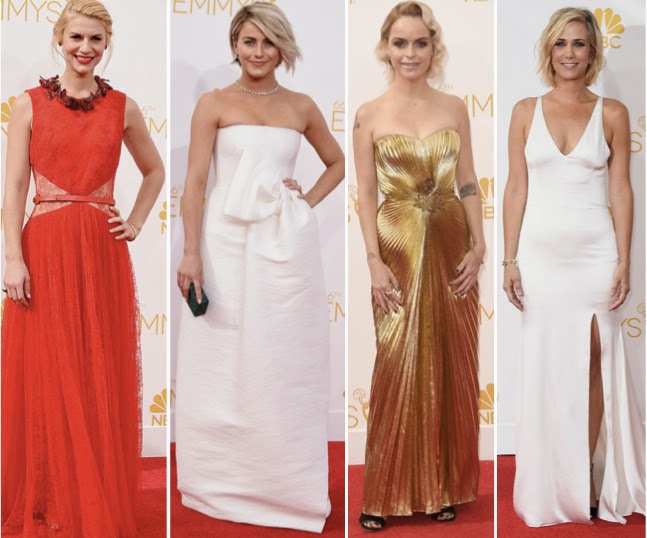 Claire is so great, this just has too much going on for me. I also really want to love this DSquared number on Julianna Hough, but the bow is strangely placed and she should be in something more fun for her age. What is this gold pleated awfulness? And lastly, I actually really love this dress on Kristen Wiig, but the fit of this is unfortunate.

These are pretty much the worst of the worst... 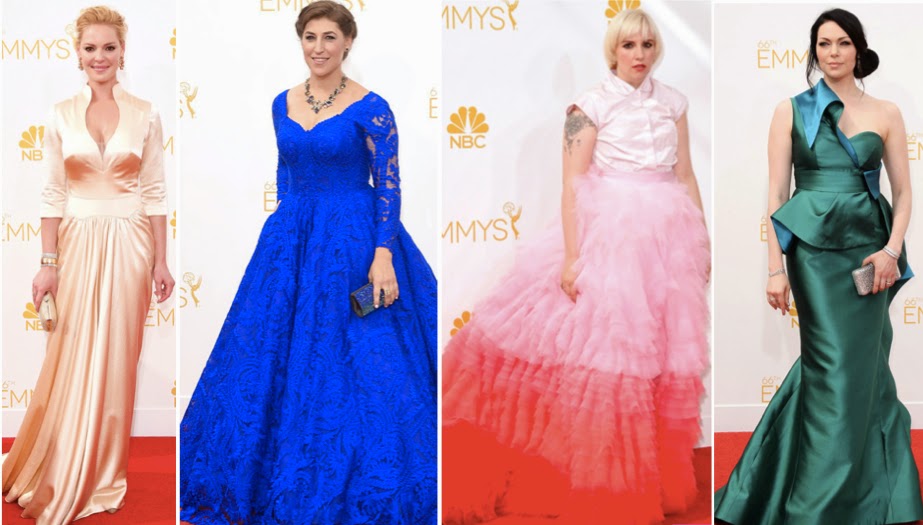 I feel like Katherine Heigl got like one last shot to be a part of a tv show, because she is so widely speculated to be a total a-hole, and she showed up wearing a dress she found in her attic on her farm in Utah. Just when you think Blossom couldn't get any worse, she decided to go grandma glam. Too much lady. While I appreciate Lena's quirkiness, I cannot get behind this combo. It is like she has been such a naked grown up on her show she wanted to wear exactly what a ten year old girl would pick. And her hair cut. There is so much wrong with Lauren's dress, that not much needs to be said. Those dark eyebrows are so rough.

What did you think? I know that we don't always agree and I kind of love that about red carpet picks.
xo
Erin