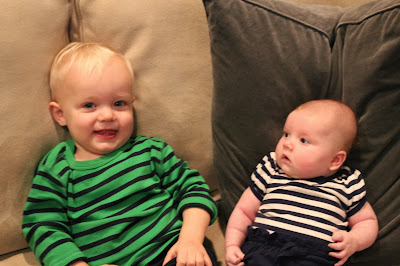 It has been eleven weeks since becoming a parent of two. Two is such a big number to me now. Everything in life should be referred to by double (or triple if you have three, etc.) when talking about taking care of more than one child. Because it is not just about two, it is about doubling the amount of everything. In my house that means diapers and bottles, colds and night wakings, smiles and cuteness.

It is not necessarily that much harder as it is that much more intense. Every day is a juggle of who will wake up first, who gets fed first, who takes a nap next, all until the end of the day. Which by the way is around seven and I follow shortly to sleep at eight. Time goes slowly, yet so fast, it is the strangest thing. I heard the best description for this time in life, "The days are long, but the years are short."

You know you have heard a million times from parents before you that time goes so quickly, but when you are sleep deprived and crazed you think that those people are straight liars. But now you know it is true and they were probably the parents of multiple children.

Not much of my pregnancy, delivery and postpartum was different from the last. Easy pregnancy, quick delivery, and hormone craziness with the baby blues for a month or so. Now that amnesia that Moms suffer is starting to happen. The memories of how hard it was nine months pregnant to chase after a toddler seem hazy, and the uncomfortable tightness of those crazy contractions seems like something that never happened, and the weird anxiety that I suffer in those first weeks fades from my conscious. It is strange how it is so hard to remember so quickly. But I guess that is what makes us do it again.

The best part is you start feeling like yourself around three months. Albeit a squishier, slightly crazed, not always out of your pajamas each day self. But more like a human that can function with the outside world. And each month it gets better. For everyone.

So we are having a good time in our house. Baby girl has discovered her brother and loves watching him. It is crazy cute. Baby boy has some really interesting dance moves that are the highlight of my day (think modern dance meets raver). And date night is happening again. Even if it is wine after the kids go to bed.

So the second time around has been great so far. I highly recommend it and good luck to those that are also in it.